Originally published in 2008. Been thinking a lot about the economic meltdown and my own poverty. Fact is, I’ve learned so well how to be poor that the global financial crisis isn’t affecting my lifestyle a whole lot—I’ve been surviving on next to nothing for […] 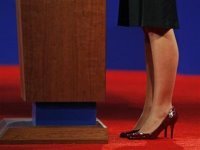 Who Says a Beauty Pageant Isn’t Good Prep for Politics?

Originally published in 2008. If you don’t want your sexuality brought into the analysis of the debate, then I advise not wearing your come-fuck-me pumps onstage. Sorry, evangelical “feminists.” The heels are fair game. You’re the moose-hunter, Gov. Palin—you know that success is all about […]

Watching the 5:00 evening news and seeing that The Bailout passed the House (Need I have checked to verify that Deb Pryce voted for it? No, but I did anyway because I’m a responsible writer.), I realized that there might, theoretically, have been a bailout plan that I might have been able to get behind. This just wasn’t it.

The rush to pass it was an act of cowardice on the part of the nation’s economic and political leaders, who are unable to trust even their own kind, let alone the Great Unwashed Masses.

Nobody really wants change. If they did, they would have been willing to suck it up and tighten their belts and dig in for the long haul. (‘Nuff clichés, methinks.)

It’s the same situation as everybody longing for a third party but nobody being willing to vote for third-party candidates: nobody’s willing to live through the disastrous transitional process while the old phoenix burns up.

The fact is that the economy would have recovered if the bailout had not been passed, and it might have become stronger than it used to be because people might have learned something. But no, we’re throwing good money after bad and keeping a de facto colonialist system on life support.