Our fairy tale (yes, I said it) 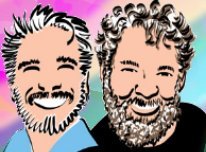 I remember when Khrysso asked me to marry him on Thanksgiving Day last year. Our relationship took off like a rocket after we started dating in August, so he might have asked me before that, too, but that’s the one that sticks as official. He understood the complex circumstances around my separation from Sheri, and we started planning a wedding for “as soon as possible,” pending my again becoming a single man when Sheri’s disability benefits were settled. We never dreamed I would become a widower instead of a divorcee. We considered how long to wait before moving ahead with the wedding, what would seem respectful, but practically, I was already in transition. Ending my life with Sheri had never been a consideration, only ending our relationship as a married couple. Saying goodbye and letting go was grief enough, without delaying the joy of moving on. One of the plagues of my life to date has been living with a spirit of procrastination, dragging feet, and putting off things that desperately need doing before the opportunity is lost. No more. So we set the date and are forging ahead.

Khrysso and I wrote the following for our wedding listing on withjoy.com. I thought I’d share it here as well. It’s just so remarkable to me that a whole new life became possible so abruptly last August with one date for coffee. Just goes to show, one should never lose hope, and that when you get on with the business of living authentically, happiness sneaks in and slugs you with a brick.

Doug knew from a very young age that he was attracted to men, but was taught that the Christian thing to do was bury that demon and live straight. Fortunately, he found love with his best friend, Sheri, and they got married and eventually raised children, but as proven over and over, marriage and prayer didn’t take the gay away.

Ironically, it wasn’t because of the gay thing that Doug and Sheri finally agreed to divorce. They began the process of separating gradually, and Doug wanted to make sure that Sheri and their children would be as ready as they could be for independence.

Khrysso never married and never had a long-term relationship with a man, either.

Both of our lives began to revolve around Second April Galerie: Doug’s because of the Kathleen Howland Theatre, home of his Gilda Shedstecker Presents! theatre company and because of his artist space, Doug’s World Downtown, and Khrysso’s because Second April became the gallery where he exhibited his art.

As fellow artists in the Canton Arts District, Doug friended Khrysso on Facebook and we maintained an online acquaintance for a couple years. Khrysso didn’t know that Doug was interested in men… though he did think of him as “that cute guy with the gallery upstairs.” They managed not to catch each other’s eyes, even, in real time — not that Doug was yet available — until Second April changed hands and became Avenue Arts.

By that time Doug had begun to live a separate life as a gay man, thinking that he would live a solitary life. Khrysso had been used to being single for so long that it never occurred to him that romance might ever work out for him.

But one day, Khrysso asked Doug at the gallery to help him figure out the circuit breakers for the lights, and that broke the ice. Soon after, Doug made a joke (on Facebook) about never getting a date, and Khrysso said, “Well, it might help if people knew if you dated men or women.” Doug took a deep breath and answered, “men.”

Well, why didn’t you say so?

Within days they had a date planned at Muggswiggz café. They met at 7:00 and closed the joint.

About 10 days later Khrysso had a mild stroke and was hospitalized for a few days. Doug fretted inordinately while respecting Khrysso’s wish not to receive visitors, and we immediately resumed dating when he got out. Khrysso healed, and we began to fall for one another, hard and fast.

A few weeks later, Doug said something profound (Khrysso forgets exactly what), and Khrysso knew that this man was his future. He put on Facebook that he was in a relationship. Doug was horrified but also really, really thrilled. Doug uses the word “inevitable” to describe how quickly we became sure of each other. By Thanksgiving, we knew that we had a future together.

In the meantime, Sheri was sicker than anybody knew, and she died tragically and unexpectedly before the legalities were ironed out. Doug suddenly had two daughters to finish raising alone. But he wasn’t alone, because Khrysso was, as he is fond of saying, “in it for all of it.” We knew that it was much more than a hunch that this group should somehow form one family.

So we were free to marry, and now we will.

Grey Forge LeFey
You have no idea!
And what a summer!