As I was visiting mom in rehab this evening an old familiar Rankin/Bass favorite came on the telly. Yes, it is that time of year again: ho, ho, ho, and I am compelled to share with you a story, a tale, a reckoning.

All my failures in life can be directly attributed to Rudolph the Red-nosed Reindeer. It’s true. I was a very impressionable age in the sixties when Rudolph was new and magical, and I was a sucker for those claymation messages which seemed so benevolent on the surface.

The first misconception– Misconception? No, it really is an outright lie. If we’re going to be frank about the devastation caused by this innocuous 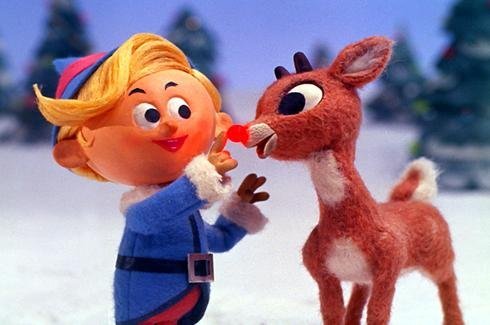 children’s holiday entertainment delight, then let’s call it what it is. The first LIE is that it’s okay to be a misfit. This is not true. Rudy and his new best friend Hermey actually become heroes because of the quirks that make them different, and everybody loves them. And we know this is not how real life operates.

The message about friendship that really stuck with my 6 year old self after watching Rudolph is that your best friends will betray you and call you names if you make any startling revelations about yourself, so it’s better to keep your piehole shut! I mean, come on, Hermey wasn’t an outcast because he wanted to be a dentist. Hermey was an outcast because he preferred to wear his hair with that stylish and rather attractive extreme half-bang, which swooped sharply over one eye, rakish and defiant, with a pointy edge that could lacerate the unwary if he wasn’t careful. In my first career as a hairdresser I emulated that bang on many old ladies, many, many old ladies. And of course it was impossible for Hermey to NOT like Rudolph when that lucky buck was styling bling like a neon beezer. We all know that Hermey’s real problem had everything to do with being a fussy little pansy, but nothing to do with teeth, and that Hermey found screen life later in the person of David Hyde Pierce.

I believed that one day I too would be rescued from my solitary melancholia by a similarly outcast fellow who would join me in a compulsively affirming choreographed song about embracing our nebbishy selves and spitting in the world’s eye! My constant efforts to engage others thusly reinforced my own image as weirdo and a person who fails to recognize personal space.

The next lie that was perpetuated by Rudolph and taken to heart by untold thousands was that there is always tomorrow. How many of us became a little deer named Clarice in our dreams, with those huge, impossibly soft deer eyes (which were probably so deer-like because she was a deer) singing sweetly about how you should believe in your dreams come what may. Yeah, just what my father wanted me to believe! The man is telling me at 8 years old to learn a trade, become a mechanic, and I’m pretending I’m Clarice wafting through frozen crystal landscapes like doe-colored chiffon. I clung to that belief through all the angst of my growing-up years, telling myself when the chips were down that “tomorrow is NOT far away!” Isn’t that just another way of saying, “I’ll think about that tomorrow. Tomorrow is another day!” Clarice was a beautiful dreamer, Scarlett was queen of denial. What a fine line between vixen and venison. Get your head out of the snow belt, Clarice! Tomorrow is TOMORROW, it’s always 24 hours away, and you’re not getting any younger waiting around for it. Time keeps on slipping, slipping, slipping into the future, and one of these days your fluffy white tail will be droopy dried out jerky. Ditch that bubblegum bow on your head and SEIZE THE DAY, dear! And when you run away from that bully buck dad of yours, don’t go looking for Rudolph. You run and don’t stop until your little hooves hit Berkeley where you can learn to be a dissident and overthrow the tyrant Claus! (OK, it WAS the 60s, after all)

The third Rudolph lie cloaked in charming childhood innocence is that when you’ve run away from home and are lost in the wilderness, a kindly and forgivingly eccentric woolly wildman will come along to escort you to safety. You can excuse his oral fixation with his pickaxe and climb into bed with him, but stay alert long enough to beat feet when the Sandman claims your best friend the pansy who is obviously okay with the situation. Douse the light indeed!

And while we’re visiting the Island of Misfit Toys, I have to ask, because I’ve never been able to figure it out. What the heck is up with that King Dawntreader. Or Muckraker. Moonraiser. Whatever. That lion king, he wouldn’t let Rudolph and his friends stay on the island because it wasn’t a place for living creatures. So what was HE doing there? Hello! Was he some kind of Zombie master or something? Were the misfit toys DEAD? Is that why that little ragdoll was there on the island? It didn’t look like there was anything wrong with her craftsmanship. She looked normal. She didn’t have square wheels, or polka-dots, or even a wacko name like Charlie. They didn’t allude to any defect like an over-active betsy wetsy. So I think she must have been a lesbian.

And finally, we discuss the true villain of the Rudolph Holiday Hoax: Mrs. Claus. Beware hatchet-faced old women who deride others for their looks and encourage unhealthy choices. Sure, “Who wants to see a skinny Santa?” and “Eat, Santa, eat!” are the words of a harpy who is obviously so crippled with self-loathing that she must sabotage any self-esteem in the castle. It is my personal theory that Rudolph’s Mrs. C is actually Santa’s second wife, a harridan who befriended the lovely Jessica from Santa Claus is Coming to Town and then murdered her and took her place, feeding Santa’s eggnog addiction and terrorizing the North Pole. She is probably the sister of Miss Almira Gulch.

And in the end what we can take from Rudolph is that when faced with fanged annihilation, the best thing to do is be a pig and resort to violence. These lessons I embraced in my youth continued to loom as markers on my emotional landscape until years of intense therapy wore them grudgingly away. Happy day for me! and yet for generations of holiday viewers, the lessons still deceive. How else can we explain Honey Boo Boo?

Grey Forge LeFey
When God Left the Building
On the inside